Not just any job, a job with high quality of life aspects. A job with decent pay, low stress and promotes well being. A job that supports a healthy society. Qualities long since left many jobs when the manufacturing industry jumped continent. These jobs will not be outsourced. These jobs are likely to have a good commute. These jobs are rewarding and contribute to medical health. These jobs are for Americans!

In terms of rewarding jobs, without manufacturing, the US is left with service and adult care as the dominant available markets. People in the service industry rightfully find their craft enjoyable, but the tipping industry in America lags far behind compensation standards in Europe where “gratuity” is built into the menu prices and distributed to staff in wages. Compensation for those caring for the elderly will  expectedly have an increase as the ‘baby boomer’ bubble is rising toward the top of the age graph, and Japan and Germany far outperform the US in pay and benefits.

Even physician and medical practitioner benefits in other countries are more evenly distributed in relation to school costs. Different from the US, where the exorbitant cost of Medical and Legal Education enslaves doctors, nurses and lawyers to long hours for screaming high salaries.

How To Get A Job In The Booming Legal Marijuana Business

In terms of making a career move into the Marijuana industry, the above article’s recommendation include having specific, in-demand skills and volunteering for marijuana advocacy groups.
Websites dedicated to posting and placing people with jobs

The following list details the different types of jobs that will increasingly become available as recreational legalization expands, as medical marijuana states reap the benefits of medicine for their residents, and as the nation progresses as a whole.

Successful businesses that are well set up run themselves. Dispensary Owners are often community advocates, and much of their work involves philanthropy and community education.

Greenhouses provide excellent opportunities to improve technology in renewable and alternative sources and systems. Waste systems in greenhouses can often be closed loops, and sometimes can fuel digesters that also produce electricity. The walled nature and controlled climate provide an intricate system through which to run the piping of a geothermal heating system. Some geothermal systems now capture energy from solar thermal sources on the property, storing the heated water in a giant partially buried cistern.Improvements and technological advancements for increases in greenhouses will no doubt benefit the renewable energy industry as a whole.

An efficient  grow room optimized for all factors involved in keeping a clean and smoothly running operation is very rewarding. Lights, ventilation, interior wall reflectance, optimum CO2, mechanized watering are among the many systems that can be optimized and mechanized.

There is art, there is science and then there is growing. The genetic hybridization and the environmental inputs involve limitless opportunities for experimentation. Hybridizing and optimizing one’s setup can provide countless hours of enthralling research and then exacting through trial and error through season after season. Successful hybridization that results in a perfect combination of desired traits suited to people’s specific ailments is a true experience of working with and cultivating a plant for maximum human benefit. Ph balance and trace minerals are just the tip of the iceberg when it comes to the transition from genetics to environment.

Easy work (for the dexterous!) and varieties of compensation. 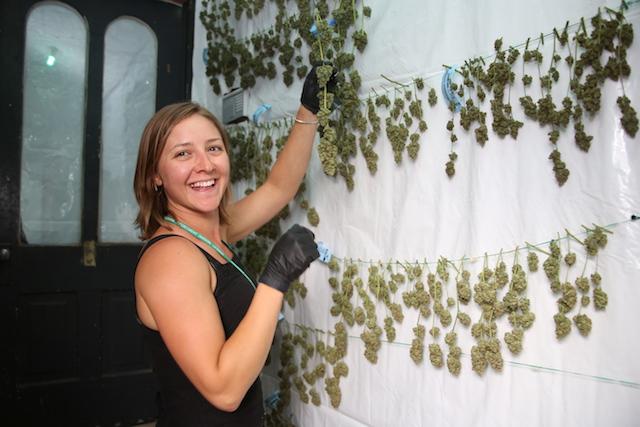 From condensed oils to baked goods. From truffles to cans of soda. There just might be a million and one different ways to extract, condense, and dispense the oil… Baking…

Logistics has a certain rewarding nature. Your safe transport of medicine and product to the storefront and individual patient keeps the whole system running smoothly. Unlike most trucking jobs in the industrial goods transport system, most marijuana delivery routes local, and hours do not keep workers away from families outside of regular work hours.

Working in a medical dispensary providing and educating on a wide variety of marijuana types and products is a very rewarding craft to know. Whether your customers are recreational or medical, you know your efforts are spent helping others be well.

There’s no need to blur any lines and keep the system running smoothly.

When Arizona voters approved the use of medical marijuana in 2010, Steve Cottrell saw a way to combine his laboratory background and his interest in the plant he’d been studying since his 11-year-old son died of cancer more than a decade before. Cottrell is now the owner of AZ Med Testing, a medical marijuana testing laboratory in Tempe. Dispensaries pay Cottrell and his business partner, Brenda Perkins, to test marijuana samples for mold and pesticides. “We’re making money, but we definitely have our challenges,” he said. “But now that dispensaries are open, it’s moving forward.” According to a study sponsored by the Regulated Dispensaries of Arizona Association, the two jobs at AZ Med Testing are among estimated 1,500 that will be created by Arizona’s medical marijuana industry. Tim Hogan, an Arizona State University research associate who authored the study, used information from Oregon’s established medical marijuana industry to estimate the size of Arizona’s market. “It’s a pretty simple industry,” he said. “There’s not too much nuance. The main driving mechanism is how many patients.”Hogan found that the industry had the potential to create not only 1,500 direct jobs for marijuana growers and dispensary employees but up to 5,000 indirect jobs at places like grocery stores. Arizona has approximately 38,000 medical marijuana cardholders and is allowed 126 dispensaries, a percentage of the state’s operating pharmacies. Only a handful are open now.Hogan said his study models only the straight economic impact of the industry instead of offering a more extensive cost-benefit analysis. The industry is small but should contribute to Arizona’s economy, he said. “Given the size of the industry, it seems it will generate substantial income and tax revenue,” Hogan said. In Colorado, which legalized the use of medical marijuana in 2000, dispensaries brought in nearly $200 million in sales and paid about $5.5 million in state sales tax in 2012, according to that state’s Department of Revenue. Beth Wilson, an economics professor at California’s Humboldt State University and a faculty member in the school’s new Humboldt Institute for Interdisciplinary Marijuana Research, said much more study on medical marijuana is needed.She said it’s possible that more states legalizing the drug for medical or recreational use could lead to marijuana mega-farms run by tobacco companies instead of small businesses.“No one can know for sure what the impact is,” Wilson said.  Michelle LeBas worked as an office administrator at a car dealership before becoming a dispensing agent at Bisbee’s Green Farmacy Natural Relief Clinic. She verifies that patients have valid medical marijuana cards and then teaches them about different strains of the plant. LeBas said the dispensary, which has three employees and an on-site doctor, faced some scrutiny when it opened in late March.“People just thought it was an excuse for stoners to do it,” she said. “But we’ve overcome that and we have people coming in here that genuinely need it. We’ve given them a completely new form of care.”  Green Farmacy Natural Relief Clinic serves about 100 patients and has provided 25 with new medical marijuana cards. Maricopa County Attorney Bill Montgomery has sought to block the state’s medical marijuana law since it went into effect. He said any study that discusses medical marijuana’s possible economic benefits is inherently flawed because the state loses more in criminal prosecution. “It’s crock,” Montgomery said. “None of those studies that purport to show an economic impact take into account the criminal impact.” It’s important to remember that all marijuana is illegal at the federal level, said Carolyn Short, chairwoman of Keep AZ Drug Free, a committee that formed in opposition to the 2010 ballot proposition that legalized medical marijuana. She said economic models like the study commissioned by the Regulated Dispensaries of Arizona Association have to be done in a bubble because every part of the medical marijuana business violates federal law. “Every single time a dispensary sells a joint or an ounce, they’re doing something illegal,” Short said. At AZ Med Testing, Cottrell said the possibility of federal prosecution or a raid by the Drug Enforcement Administration hangs over his head each day. However, he said he remains focused on doing his job well.“Sure, they could come down and knock our door down and arrest us for this plant material,” Cottrell said. “But there’s far more dangerous non-law-abiding people who are doing a lot worse than testing plants for pesticides, and we have to believe the DEA is going after them.”