Green man has recently been a featured alter-ego of the Charlie Kelly character on It’s Always Sunny in Philadelphia, but there’s more to Green Man!

There is also this handy guide http://www.greenmanspage.com/guides/ about growing and common knowledge about growing weed that uses this handy motif.  I thought it was interesting to present some research on Greenman through History!

There is more to the legend of greenman,

presented below wikipedia’s entry on greenman check it out.

A Green Man is a sculpture, drawing, or other representation of a face surrounded by or made from leaves. Branches or vines may sprout from the nose, mouth, nostrils or other parts of the face and these shoots may bear flowers or fruit.

Commonly used as a decorative architectural ornament, Green Men are frequently found on carvings in churches and other buildings (both secular and ecclesiastical). “The Green Man” is also a popular name for English public houses and various interpretations of the name appear on inn signs, which sometimes show a full figure rather than just the head.

The Green Man motif has many variations. Found in many cultures around the world, the Green Man is often related to natural vegetative deities springing up in different cultures throughout the ages. Primarily it is interpreted as a symbol of rebirth, or “renaissance,” representing the cycle of growth each spring. Some speculate that the mythology of the Green Man developed independently in the traditions of separate ancient cultures and evolved into the wide variety of examples found throughout history. 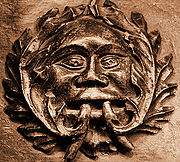 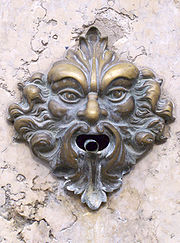 Superficially the Green Man would appear to be pagan, perhaps a fertility figure or a nature spirit, similar to the woodwose (the wild man of the woods), and yet he frequently appears, carved in wood or stone, in churches, chapels, abbeys and cathedrals, where examples can be found dating from the 11th century through to the 20th century.

To the modern observer the earlier (Romanesque and medieval) carvings often have an unnervingly eerie or numinous quality. This is sometimes said to indicate the vitality of the Green Man, who was able to survive as a symbol of pre-Christian traditions despite, and at the same time complementary to, the influence of Christianity: rather than alienate their new converts, early Christian missionaries would often adopt and adapt local gods, sometimes turning them into saints.[5]

From the Renaissance onwards, elaborate variations on the Green Man theme, often with animal heads rather than human faces, appear in many media other than carvings (including manuscripts, metalwork, bookplates, and stained glass). They seem to have been used for purely decorative effect rather than reflecting any deeply-held belief. A Swiss engraver, Numa Guyot[6] created a bookplate depicting a Green Man in exquisite detail. It was completed circa 1887.

In Britain, the image of the Green Man enjoyed a revival in the 19th century, becoming popular with architects during the Gothic revival and the Arts and Crafts era, when it appeared as a decorative motif in and on many buildings, both religious and secular. American architects took up the motif around the same time. The Green Man travelled with the Europeans as they colonized the world. Many variations can be found in Neo-gothic Victorian architecture. He was very popular amongst Australian stonemasons and can be found on many secular and sacred buildings. 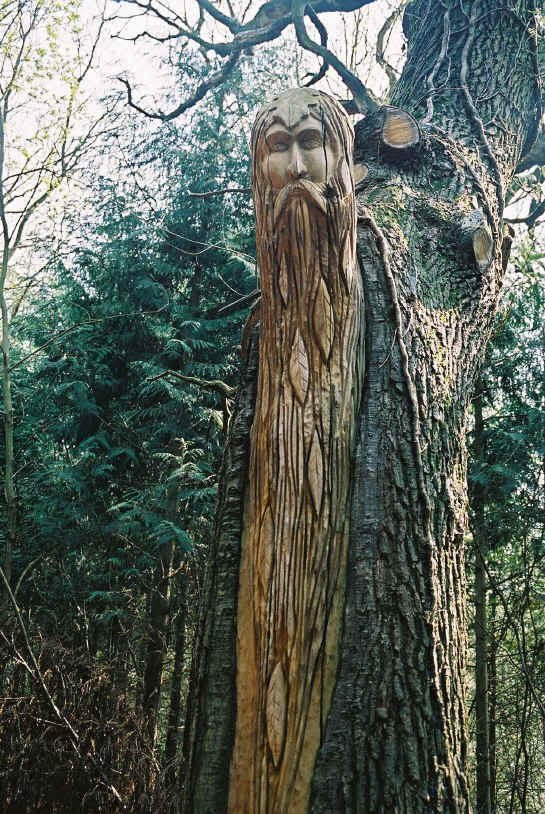 The Green Man image has made a resurgence in modern times, with artists from around the world interweaving the imagery into various modes of work.[7] Among these are English artist Paul Sivell, who created the Whitefield Green Man, a wood carving in a dead section of a living oak tree; David Eveleigh, an English garden designer who created the Penpont Green Man Millennium Maze, in Powys, Wales (the largest depiction of a Green Man image in the world); and sculptor M. J. Anderson, who created the marble sculpture titled Green Man as Original Coastal Aboriginal Man of All Time from Whence the Bush and All of Nature Sprouts from his Fingers.

American artist Rob Juszak has taken the theme of the Green Man as Earth’s spiritual protector and turned it into a vision of the Green Man cradling the planet; artist Dorothy Bowen created a kimono silk painting, titled Greenwoman, as an expression of the feminine aspect of the legend.

Next post: Designer Baggies For Upscale Weed Dealers and Connoisseurs