Well, this is brilliant!

Yesterday afternoon I got word about a DC-based company called HighSpeed. 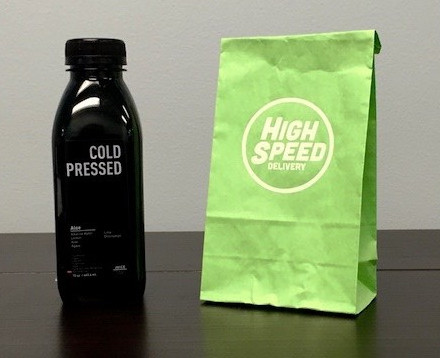 As reported by dcist, HighSpeed is “an on-demand cannabis and cold pressed juice delivery startup” branching into the D.C. market from Oakland, California.

Here’s how it works: you order juice on a sliding scale and get cannabis as a “gift.” The “Just Juice” option is $11 and you get “some” marijuana on the side, says HighSpeed CEO David Umeh. “Love” costs $55, and “Lots of Love” will run you $150.

In DC, the current legalization law allows for the possession, purchase, and growing of marijuana. But, you can’t actually sell it. You know, because by allowing folks to sell it, that would be wrong. Huh?

While I’m encouraged by the way DC has handled the legalization issue, the initial law is, for lack of a better word, stupid. But it is a very important step in the right direction. And because HighSpeed does actually sell “just juice” to a lot of folks, it seems, so far, that the company has avoided unwanted scrutiny. Although after the recent piece in dcist, I suspect they’ll be getting a call from some overzealous bureaucrat who thinks tax dollars should be spent shutting down legitimate businesses instead of locking up the lawmakers that continue to profit from the war on drugs.

In any event, it’s clear that HighSpeed is doing well. Here’s what I got when I went to the company’s website:

This IS Socially-Responsible Investing

Truth is, I love this idea.

In fact, I think HighSpeed should take it one step further by really pushing the envelope on health and sustainability. Perhaps by providing an organic option. Maybe an organic apple/ginger/carrot juice with some organic “love.”

Certainly this could prove to be a valuable premium option for all those rich DC lobbyists and lawyers who don’t mind ponying up a few extra bucks for high-end weed – I mean, juice.

In any event, when we talk about opportunities in the legal marijuana market, this is the kind of stuff that stands out. A valuable combination of entrepreneurial spirit and a set of stones that allows these folks to stand up to unjust laws and a handful of policy makers who still argue that prohibition is in place to protect you, not to incarcerate people with brown skin while generating filthy lucre by handing out contracts to private prison companies.

As a socially-responsible investor, I actually find that a great way to combat the war on drugs is simply to invest in legal marijuana companies.

And if you’re just looking for some tasty juice, might I suggest the Turmeric Tangerine Lemonade from HighSpeed.

Next post: The Whole Foods of Pot – Why organic local marijuana is the future