It’s Time to Invest in Organic Marijuana.  That’s what the good people over at WealthDaily.com have an interesting article about how to invest in Public Marijuana companies.  I think there is also opportunity in the local markets too, organically grown product has to be much like the high end wine, where certain brands will be localized, but yet also have a national presence. 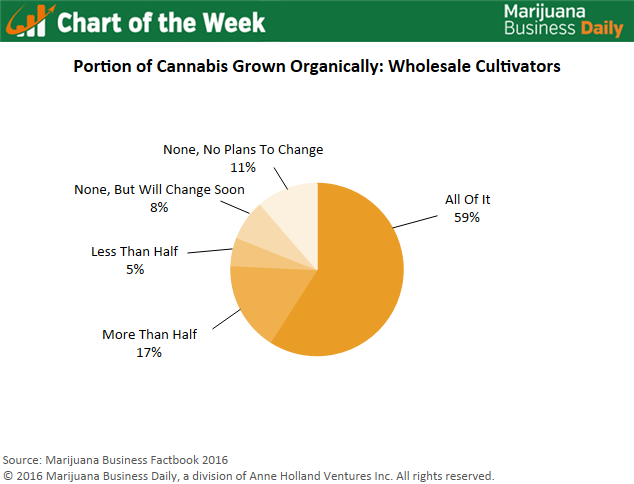 Now I have to be honest, I’m a bit suspicious of this chart.

Given the amount of time I’ve spent researching organic cultivation in the legal marijuana industry, I find 59% to be a bit high. But in all fairness, MBD is a lot closer to this industry than me, so for now, we’ll just use this very optimistic chart as a launching point for something that’s not only incredibly important in terms of health and sustainability, but in terms of investment options, too.

As pointed out by MBD …

Medical marijuana patients and recreational consumers are increasingly interested in the health and safety of their marijuana, and many are looking for cannabis that is grown without the use of pesticides.

This is something I’ve been saying for the past two years.

It makes no sense to me for a sick person to use medical marijuana if that marijuana is soaked in all kinds of random, toxic chemicals. Especially when you consider what chemist Jeffrey Raber said a couple of years ago in regards to pesticides in marijuana …

“I think that what’s so alarming to us is that such a huge amount of pesticide material could be transferred,” Raber said. “And, you have to consider that when you inhale (something), it’s much like injecting it directly into your blood stream.” …

Raber said it’s important to remember that smoking a marijuana bud that’s been sprayed with chemicals is far different than eating a non-organic tomato. First and foremost, he said, there are no controls over what’s sprayed on marijuana crops. And, while most people would rinse off a tomato before eating it, they can’t wash a bud before putting it in their pipe. The body also has filters in place for things that are ingested, he said, but not for what’s inhaled.

As an advocate of both legal marijuana and organic agriculture, I’m a huge fan of organically-grown cannabis. I’m also a huge fan as an investor. It’s one of the reasons I recommended organic cannabis grower OrganiGram (TSX-V: OGI) back in September, 2015. Take a look how that’s worked out so far … 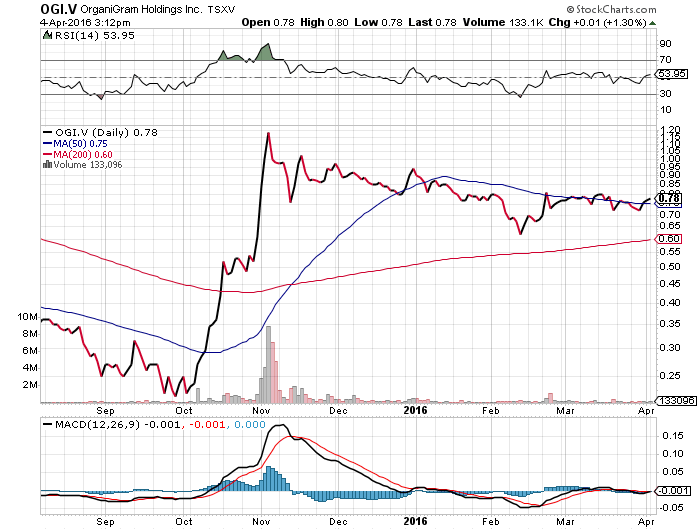 Organically-grown cannabis is no joke. This is going to be a huge segment of the market, and investors should pay attention.

There are also some other fantastic companies in the organic cannabis space that aren’t publicly-traded, like Honest Marijuana and HiFi Farms, which, by the way, is currently $400,000 shy from completing a $3 million raise.

Both Honest Marijuana and HiFi are solid operations that are going to make a fortune by providing quality, organically-grown cannabis to a market that’s growing faster than anything I’ve ever seen before.

Of course, there are still going to be hurdles.

After all, it’s not as if there’s a USDA certification for cannabis, and certainly there will be plenty of less-than-honorable folks trying to pass off their weed as organic. That being said, the folks that do this right, and stay legitimately organic are going to be the folks that will be the Whole Foods of Pot in just a few years.

Invest accordingly. Please do your own research.

Next post: He’s a marijuana consultant; He invests in the industry